Cultural Entrepreneurship and the Culture of Bright Ideas 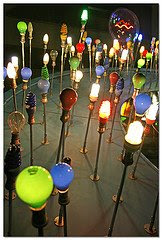 Imagine spending a day thinking and talking about cultural entrepreneurship and what makes a cultural entrepreneur. I got to do that yesterday as part of a grant-funded project to design a new professional development opportunity for mid-career museum professionals. The discussion was wide-ranging and energetic as veteran cultural entrepreneurs questioned, debated and explained their own and each other's approaches to teaching and living entrepreneurship.
One fundamental characteristic that all agreed upon was that entrepreneurs -- whether in the cultural, social or business sector -- are always looking for opportunities to capitalize on and to solve problems in ways that will meet and extend mission. As one participant said, "It's about opening doors and windows in the box that is our organization. It's our job to open a window, then open another window, then another."
This conversation touched upon some interesting "opening windows" resources that I wanted to share with you. The first is the Creative Problem Solving Institute (CPSI), organized by the Creative Education Foundation , a non-profit membership organization of leaders in the field of creativity theory and practice. Here's what CEF says about itself:

It offers a 2-day Next Idea Creativity Conference in the Berkshires each fall "where you can "Design the Next Phase of Your Life", get your "Next Big Idea", "Renew Your Creative Spirit", "Discover Your Passion", make "New Connections", and learn tools to help you "Self - Actualize"." I'd like to go.
Among the many resources the group shared were two book titles: William Duggan's Strategic Intuition: The Creative Spark in Human Achievement (Columbia Business School) and Roger von Oech's A Whack on the Side of the Head: How You Can Be More Creative ("the best book...gets you to turn things around to look at them in different ways," said one).
There's more to come and I'll keep you posted.
Photo: Bright Ideas

What Would Make You Turn Down an Invitation to Join a Board?

By Anne W. Ackerson January 08, 2010
THERE'S SO MUCH WRITTEN ABOUT RECRUITING BOARD TALENT, I thought I'd spend a little time thinking about it from the prospect's point of view. Clearly, there are boards where the line is long to get on them. But what would make you turn down an invitation? Here's a short list to get the conversation started: 1. You've had no prior exposure to the organization. Your immediate reaction is "did you pull my name out of a hat?" (Is that lady in the picture the head of the Nominating Committee?) Seems as though there must be a hidden agenda at work (like you're rich and once you become a board member you'll pour all your resources into the organization) or the organization is simply looking for any warm body to fill a seat. 2. The organization doesn't have a good reputation. There's something to be said for street cred. An organization that's floundering may be strengthened by your participation or you may find yourself sucke
15 comments
Read more

Change for Your Board in 2010: A Polling Update

By Anne W. Ackerson January 06, 2010
WE'RE A DAY INTO MY LAST POLL (SEE RIGHT) AND the responses are clustering in two areas: 1) removing dead wood from the board and 2) using better/different tools to make decisions/evaluate performance. There are still six days left for your colleagues to cast their vote! In the meantime, those of you who are in need of tools for decision-making might want to check my posts on taking stock here , here and here .
Post a Comment
Read more

What to Do With Dead Wood on Your Board?

By Anne W. Ackerson January 12, 2010
MY POLL ASKED WHAT ONE BOARD DYNAMIC YOU would change this year and the top response was "remove dead wood". For my first post on this topic I'd like to start with two obvious facts: 1) most boards have some non-performing or under-performing board members AND 2) most boards already have mechanisms in place for removing dead wood...or at least the non-attending dead wood. Those mechanisms are found in the Bylaws and perhaps in a board job description. Few boards, it seems, invoke these mechanisms, mostly out of fear of offending the offender. We end up side-stepping the dead wood, dancing around it, ignoring it, wishing mightily it would go away. Oh, and complaining about it. So, even though the dead wood isn't doing much, it's sapping the energy and focus of many others. (There must be a Law of Physics about this!) Where to start and how to implement? While removing dead wood is not the most pleasant of responsibilities, it does not need to be -- and
2 comments
Read more