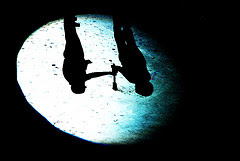 YESTERDAY AND TODAY I'M ATTENDING ONLINE sessions from the 2009 American Association for State and Local History (AASLH) conference that's being held in Indianapolis. In addition to about a dozen sessions, AASLH also has a blog and Twitter feed going. We were told in our first online session that the attendance from the online component (about 250+ of us) was making the total conference attendance a record-breaker. Impressive.
A conference blog post relating to a session on leadership succession talked about the trend of retiring staff to stick around as paid staff or volunteers to work on special projects of interest to them or to fundraise. Here's the observation by conference-goer Barbara Walden of the session she attended:

As the economy has taken a turn in our least favorite direction, a number of long time museum professionals are opting out for early retirement. Although their positions are coming to a close, a number are choosing to continue their involvement with the organizations but in a variety of roles (as a board member, consultant, fundraiser, etc.). This decision is based both on the retiree’s passion for their profession and the newly found freedom to focus on raising funds for the long term sustainability of the organization.

Is this or will it be a growing trend? Certainly, there are numerous examples of retiring directors who receive emeritus status that can bring an office and support staff, as well as access to collections, libraries, studios and other facilities, files and staff to pursue research, writing, artistic creation or fundraising. In the last five or six years, I know of one colleague who has chosen to do this and I admit I was surprised (OK, a bit aghast) when he told me. But as more and more boomer leaders plot their "retirement" paths, I have no doubt that the possibility of their continuing involvement in their institutions is an increasingly likely scenario.
This is a trend that deserves some serious attention. No matter the personalities or the structures of these relationships, directors emeriti can pose delicate triangulations of power with their successors and boards. These power triangulations also occur with their successors and staff/donors/the media/the public. The same holds true for any longtime staff who choose to remain in some "official" capacity after retirement.
Because this is an official capacity we're talking about, it makes sense to me that emeritus status needs to come with a written job description that establishes parameters of integration with staff, the board, and stakeholders, and articulates institutional expectations. I don't think this is too much to ask, even of a venerable or beloved leader.
As for board service, I remain uneasy with the prospect of former staff serving on the boards that once oversaw them, because I believe it blurs the lines of authority that must exist between the governing board and its staff. (Guess I've seen/heard too many examples of valuable board seats being take up with ineffective or naysaying former staff -- former staff can carry a heck of a lot of baggage, not all of it good.) I also believe that you can't get anything from former staff serving in a governing capacity that you couldn't get from them in a non-governing capacity, so why risk the inevitable power trip?
Photo: Day 195: Passing the torch from Steve Moraco