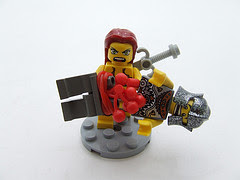 YOU'RE READING YOUR LOCAL NEWSPAPER AND YOU come across this headline "Financial Woes, Board Defections Hurt Arts Center: Former board members question executive director's decisions."  Well, that's a little gut-wrenching (particularly if you work or volunteer in the nonprofit sector, or if you're an ED).

How would you react?  You'd probably dig right into that article, wouldn't you?  Would you also ask yourself what the heck is going on that it's so bad to have made this kind of news?

As you pick your way through the article it becomes clearer that taking the ugly stuff to the press is a symptom of more deeply rooted dysfunctionality.  Sure, we readers can see it in a instant -- the lid's just blown off a whole kettle full of long-standing problems:
Don't you think that folks turn to the court of public opinion when they feel they've been wronged and they're not being heard?  In one case it was the fired director who needs to clear her name.  In another it's a board member who hasn't been able to convince enough of her board peers to fire the director.  Or it might be the only way a person thinks his/her concerns will be taken seriously.

Like turning on the lights in a dark room, sometimes moving organizational dysfunction into the realm of public scrutiny can be a good thing.  In the case of one organization, local citizens are now calling for the board (via letters to the editor and op-ed pieces) to engage the community in an honest conversation about the organization's future.  Sometimes it can help release the toxicity from the organization and offer opportunities for new people and perspectives to become involved.

Sometimes it can have the opposite effect.

Either way, the organization and its mission gets derailed, because it can't function until the crisis is addressed.

How would you handle an internal crisis that suddenly goes public?

Linda said…
Great summary, Anne--And I think there's another issue here as well--if you were a departed director who went very public slamming your board of directors--doesn't that sort of limit your options? How do you raise concerns and still keep your viability?
January 27, 2010 at 10:53 PM

Anne W. Ackerson said…
I just don't think I'd do it in the press, because there are unintended consequences. I don't think a smear campaign does anybody any good. But that's just me.

I would raise my concerns to those responsible for the legal oversight of the organization -- the Attorney General. And I might consult an attorney to see what my options are.