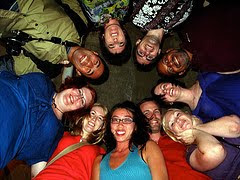 I'M THINKING ABOUT TWO GROUP EXPERIENCES I'VE ENCOUNTERED IN RECENT DAYS: one is a planning team for a professional development program and the other is the board and staff of a historic site that has entered a new phase of independence.  Both groups are in the throes of creating something new; both have many voices around the table.  But, one experience has been a struggle at almost every turn while the other was a high-energy, highly focused (even fun) effort.  How come so different?
Group work is shaped by several common elements, but how they're addressed and tended to can lead to quite different -- even deleterious -- results.
Who's at the Table:  Anything you read about effective collaborations underscores the importance of having all the major stakeholders at the table.  It's incredibly important to take the time to put this group together and to give them an opportunity to get to know one another.  That's especially true when you've got a disparate group who come from divergent sectors or backgrounds.  Barring all the potential positives of a "team of rivals" approach, personality does play a critical role here, as well.
We know that with many start-up projects, the group that develops them tends to be fairly homogeneous and "like minded".  That is largely the case in my examples.  The group that's struggling is made up of cultural sector leaders, most from one industry.  In this case, homogeneity has not been, so far, a predictor of success.  The seemingly more successful group at this point is also quite homogeneous with very little economic and social diversity.  Their struggle is to become more diverse and less "club-like".  Would that also help the struggling group?
Focus of the Work:  Both groups have relatively focused agendas.  The struggling group's focus is to create from scratch a high-level professional development program for a specific audience.  Over the course of the work, many twists, turns and false starts have made some stakeholders question the focus.  Considerable time has been spent rethinking the focus and stakeholder roles.  Continued ambiguity of focus and outcome is sapping the group's energy, enthusiasm and sense of ownership for the project.
By contrast, the high energy group is not quite developing something from scratch.  The focus for this group is tangible -- it surrounds them everyday in three-dimensional form.  They "own" their focus both literally and figuratively.  While they aren't building their project from scratch, they must continually break new ground in order to thrive and they must make some key leaps in institutionalizing their roles and responsibilities to be successful for the long-term.
Leadership of or Within the Group:  The leaders of the struggling group suffer from professional attention deficit syndrome.  Their plates are too full, their commitment too splintered.  They pay the most attention to the project when a deadline is looming or when team members complain.  When group members have attempted to exert leadership, it has not been well-received.  Lack of leadership continuity can be a breeding ground for second-guessing, splitting into cliques, back channel discussion and decision-making, and drifting apart.
The high energy group has strong, long-tenured and respected leadership.  But leadership within the group, particularly at the committee level, is uneven.  And burnout is always a concern.  This group must figure out ways to push leadership deeper into its ranks to build a bench for succession while thoughtfully widening their circle to include more diverse representation.
Communication:  What is true collaboration without it?  Our struggling group example is plagued by a lack of regular communication.  Misunderstandings result in the voids.  Despite the fact that this project is now more than a year in the making, many on the project team are strangers -- colleagues, yes; friends, not so much.  I find myself saying that I'm having a hard time "falling in like" with the team.  Part of that I am convinced stems from a lack of opportunity to get to know one another.
When I met with the high energy group, the first thing I was told was this group had just been together the night before for dinner at the board president's house.  They talked animatedly and laughed a great deal as they gathered for their meeting with me.  They agreed that their internal communication was frequent and informal and this will need to change somewhat as it grows.
This brings me to a book I find continually useful: Jon Katzenbach and Douglas Smith's The Wisdom of Teams (my copy is from 1999).  The authors identified six overarching characteristics of high-performing teams and I refer to them whenever I reflect on teamwork.  They are:
Photo:  artomatic huddle!  from mofo