The Caretaker Board: Anchoring Stability or Rusty Anchor? 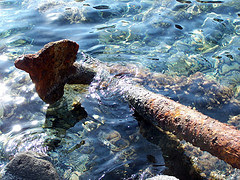 IS IT ENOUGH FOR A NONPROFIT BOARD'S primary focus to be protection of the status quo?
It's expected that every board will take care of the organization entrusted it.  There's a definition for what care means in this instance -- it's commonly expressed as the duty of "care that an ordinarily prudent person would exercise in a like position and under similar circumstances."  Many will argue that in times of economic or societal stress, the best defense of a nonprofit is to hunker down and shepherd the resources -- to, in fact, take extra care.  By this definition, taking care is an active and positive (indeed, critical) quality of a vigilant board.
The benefit of a board's prudence gets lost when that board slips into passive management of an organization's affairs.  This board -- the caretaker board -- has become comfortable with the safe harbor of complacency.  It's best at protecting its past achievements and preserving the reality it has created.  As a result,  it exercises an auto-pilot oversight (even that word is too active), and as long as the organization isn't showing any signs of outward disintegration or internal dissatisfaction, the caretaker board can deliver on its well-worn mission.  That is until something comes along to rock the boat that is beyond the caretaker board's ability to pay for it or ignore it.
To be fair, I don't believe any board starts its life aiming to be simply "the caretaker".  However, I do believe a board can unwittingly take on that mantle if it's not sufficiently challenged by its leadership or engaged by staff or program.  There was a time when only the most well-heeled and, perhaps, the very smallest or most marginal of nonprofits could support  the sleepy-eyed caretaker board.  Where a caretaker board might once have provided an anchoring stability, it has become more often than not a rusty anchor that prevents today's nonprofit from moving forward.