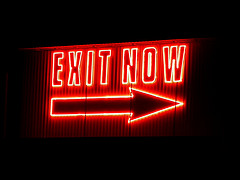 WHEN AN EXECUTIVE DIRECTOR DECIDES TO LEAVE she walks a particularly tricky tightrope from the time she announces her intentions until she flicks off the lights in her office for the last time.  The length of the tightrope is one issue:  some believe that once you announce you need to be on your way as quickly as you can engineer it; others feel it must take several months in order to tie up loose ends or participate in an overlapping transition period.  Then there are a handful of others who announce a year or so ahead of their intended departure for reasons that may have everything to do with finishing milestone capital projects or completing major gift solicitations (and these folks more often than not it seems are announcing their retirements, not moves to new organizations).  So far this year,  colleagues of mine have used (are using) all three scenarios.
Regardless of the length of the tightrope, the tricky part involves the emotions that come with a pending departure and how they're handled.  Once a person decides to leave, his head is in a different place -- he's made a critical mental transition. (Note to Boards: not a good idea to try to talk a person out of leaving who's already made up his mind to do so.  If you're successful, won't there be just the tiniest bit of 'what if?' hanging over everything?)  Once you've announced, it can be really tough to remain engaged with the people and the work -- the folks and projects you never really liked you might be inclined to ignore because they'll soon be someone else's problems.  The projects you began you will now leave unfinished so you may be inclined to move them into the filing cabinet or, perhaps, the wastebasket.
Or, you might worry that all your lynchpin initiatives -- your vision -- will get dumped by your successor.  You might spend your final weeks and days figuring out how to prevent that. (Note to You: if you haven't been able to institutionalize a guiding vision and values in your organization, you won't likely do it on your way out.)
As much as your departure is an opportunity for you, it is also an opportunity for the organization you are leaving.  It's an organization's opportunity to reassess and recalibrate without the pressures of personality (yours) or of loyalty (to you).  It can be freeing and unnerving at the same time (remember, that's how you felt when you made your decision to leave?).
My advice about departing is make it a clean break.
Once you decide to leave, it's not about you anymore.

Jweitz said…
OMG! Thank you. I knew this, but it is exactly what I needed to read the day before I announce my departure of a position of 8 years. If I have served the organization well, the infrastructure should be there to carry on without me. The angst right now is more on my end, but your words speak volumes.
August 3, 2011 at 1:07 AM

Anonymous said…
Sydney is full of surprises that will never disappoint the visitors taking Cheap flights to Sydney.
October 12, 2011 at 9:18 AM