Can Nonprofit Boards be High-Performing Teams? 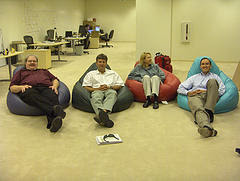 I first read Jon Katzenbach and Douglas Smith's book, The Wisdom of Teams, years ago when I was preparing to lead a team of museum educators through a five-institution collaboration. Ever since then, I've asked myself whether or not boards of directors can meet the standards the authors identified as critical to the high-performing team.
The Wisdom of Teams looks primarily at the for-profit workplace and how groups of workers combine in teams to get work done.  Teams function at a variety of levels -- or not at all -- from the innocuous working group, whose purpose is to share information, to the high-performing team, which can reach astounding feats of accomplishment.
Okay.  We know boards are groups that come together to get work done.  And some boards are highly effective and productive.  But since boards members are serving voluntarily, would they ever have enough skin in the game to be one of Katzenbach and Smith's high-performing teams? And do they need to be anyway?
The authors identified six "team basics" that define the discipline required for team performance.  They are:
Nonetheless, Katzenbach and Smith argue that there's a tremendous untapped potential for team performance in most organizations.  "Hundreds of significant team performance challenges exist in every sizable organization, regardless of the prevailing institutional purpose, leadership philosophy, or governance approach.  Some...are obvious, but many remain hidden under a blanket of assumptions about working group approaches and individual accountability."