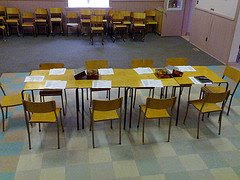 Since a governing board is first and foremost about group decision-making, frequent absences of board members undermine the basic tenet of what a board does.  Yet many boards turn a blind eye to the situation, often ignoring their own rules regarding attendance.

If board members have difficulty making meetings, then it seems to me that there must be easier ways to keep them engaged in the work of the organization without holding the board and senior staff hostage to their attendance.   Chronically absent board members make it difficult for boards to achieve the quorums they need to legally accomplish business, thus thwarting decision-making.

Thoughtful work to bring cohesion to a board can be undermined by the frequently absent.  The morale of those board members who faithfully attend meetings needs to be taken into account, too.  It's not fair to them to continually give a pass to the non-attendees.

Perhaps it would be better if frequent absentees move to an advisory council or stay active at the committee level, where there are more options for meetings.

In lieu of that, urging your physically absent board members to participate via telephone or video conference, or some combination telephone and the Web, for all or part of each board meeting is an increasingly accepted approach.  That way, they can participate in discussion and decision-making -- they're just not in the room with the rest of you.  (The NYS Not-for-Profit Corporation law allows boards to meet via telephone and video conference as long as everyone can hear everybody else.)

Trying to keep absent board members up to speed via post-meeting emails or phone calls is laborious for the board member or staff person who is assigned that task and it still doesn't get to the heart of the issue, which is that governing is a group activity.