Sending Out an S.O.S. 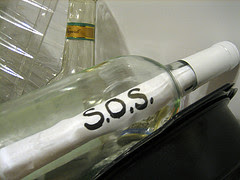 I won't soon forget getting that letter in the mail.  An 80-year old cultural organization was reaching out to members and friends to tell us that its survival was in jeopardy.  It asked for our advice and our financial support.  The first paragraph closed by stating, "Without an immediate and substantial infusion of funds, it appears that we will be required to close our doors while we work to implement a prudent fiscal strategy."
A day or two later the news hit the local papers.  And a week or so after that, the director of another cultural called to say that her board was debating the merits of "going public" with their own financial difficulties.  Some thought it might shake loose more support; others were wary of hanging out the dirty linen....or being perceived as the boy who cried wolf.
Contrast that with a third organization -- vastly smaller than the other two -- that routinely publishes lengthy pleas for assistance mixed with "the-sky-is-falling" warnings in its newsletter. (I guess since it's done routinely, it must not be very effective.)
These three examples have brought me to my short list of what to pay attention to when making the S.O.S. decision:
The saga continues for my three examples.  The first organization has successfully raised some funds, but so far it isn't enough to keep the lights on for the remainder of the year.  The promised "prudent fiscal strategy" has not yet been revealed to supporters, but I've been receiving regular emails and mailings about the status of activities.  I've noticed that the second organization has used recent membership appeals and newsletters to tell its supporters more about its financial challenges and what it's doing to meet them.
As for the third organization, well, its newsletter just arrived yesterday.
Photo: Message in a Bottle