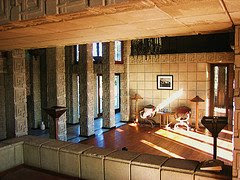 Two seemingly unrelated news items landed in my e-mailbox this month, each describing a decision by a cultural nonprofit to sell all or a portion of its assets. One is on the west coast; the other here in New York state. Both are the victims of their (and their communities’) inability to adequately steward what had been given to them for the benefit of others. These are not isolated events – indeed, we read about them every month and the pace is quickening as more nonprofits search for financial stability in a time when philanthropy seems stretched beyond capacity.

The 6,000-square-foot Los Angeles estate is being sold by the Ennis House Foundation, which recently completed the initial phase of a stabilization and restoration project after years of decay and damage from earthquakes and torrential rains. In March 2005, it was placed on the National Trust for Historic Preservation's most-endangered list.

"Our goal has always been to be a good steward of the house," said the foundation's president, James DeMeo.

"We've made a lot of progress, but at this point a private owner with the right vision and sufficient resources can better preserve the house than we can as a small nonprofit," he said, explaining the decision to place the historic home on the market.

Makes sense. It's sort of refreshing to hear when a nonprofit knows when to call it quits, when it knows it can't care for the very thing it's been entrusted to preserve. But it's tragic, too, knowing that, once sold, the public won't have access to this beautiful building.

The Ennis House story follows on the heels of a this story in my local newspaper: 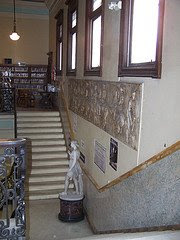 Four 19th-century sculptures will be auctioned by the cash-strapped Troy Public Library to raise money to keep a needed state grant. "We're going to sell assets,'' Mary Muller, president of the library board of trustees, said Monday. The library doesn't want to sell off pieces of art in its collection but now has no other means to cover capital expenses, library officials said. The library must install an elevator by June 2010 in order to receive about $165,000 for the project from the state. The estimated cost to build the elevator is $300,000. The library must raise the remaining $135,000.

"The building has limited usefulness without the elevator,'' said Paul Hicok, the library director. "It is a difficult decision. People get attached to them,'' Hicok said.

When the library opened in 1897, Hicok said, many supporters viewed the facility as a museum in addition to a library. That's when the statues were donated.

Will we – or have we – become inured to it all? As one more nonprofit jettisons collections, buildings, programs, staff, or drops from sight all together will we note the loss for a little while….or at all? Could that be true?