What the Health Care Summit Was Not: Four Tips for Holding Difficult Meetings 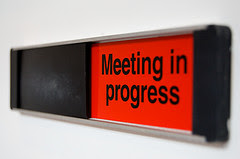 I GOT SUCH A BAD VIBE from watching snippets of President Obama's Health Care Summit that I almost had to avert my eyes.  This was a train wreck in more ways than one and I'd like to take up some blog real estate to focus in on some very practical aspects of the meeting that, frankly, occur a lot in nonprofit board and staff rooms all across the country.
1.  Room set-up:  I immediately focused in on the fact that all 37 participants were seated around a hollow square configuration of tables.  This way, everyone could see everybody else.  Name tags were prominently displayed on the tables in front of everyone's place.  Certainly, when you're trying to encourage discussion, everybody needs to be facing each other.  Yet, the group was large enough that the folks on the ends would not have been able to see the face of a speaker in the middle of a their row.  A really big round table would have been much better.
The meeting room at Blair House seemed exceedingly small and the table space each participant had assigned to them exceedingly cramped.  Sure, behind the legislators were rows of staffers and camera crews, but still I winced to see folks jostling mounds of paper in too small a physical space.  As it was, the folks sitting across from each other were fairly far apart, while at the same time they seemed to have none of their own elbow room.
I just can't imagine being in that space, around that table for hours on end.  In those bamboo ballroom chairs with little pads on the seats, too -- uncomfortable without regular breaks!  Undoubtedly, the group got up and moved to other spaces for lunch -- maybe even for breaks.  But I keep asking myself how could the space have been configured differently to promote more real discussion?
2.  Group size:  Any meeting advice book tells you that you have to have all the stakeholders in the room to make something happen.  In this instance, I doubt the group could have been smaller, but I'm also wondering if the group dynamic would have been helped by the participation of some nonpolitical stakeholders.  Would their voices have helped to cut through the worn rhetoric?
I've always found that fresh knowledgeable voices can often help a group to move beyond old arguments. They can help to balance the loudest voices, too.
3.  Moderator as Participant:  I was also struck by the fact that the president tried to wear two hats at the summit -- he tried to be the moderator for all while at the same time be a partisan participant.  As a result, I think the process of discussion really faltered, because no one without a stake in the game was really moderating.  As a result, he cut folks off, challenged their points of view and didn't really work overly hard to push for finding mutual ground.
Any time there is as a consequential issue on the table, it's best to call in a non-objective third party to focus on process to move the group forward.  That lets all the stakeholders fully participate.
Besides, a partisan moderator really sends the message to all that the discussion isn't likely to be very objective.
4.  Agenda:  If you're attempting to bring two sides closer together, each side must have a role in developing the agenda -- at the very least in developing the outcomes or objectives of the meeting.  With partisan disagreement so high - so volatile - on this issue, perhaps the best agenda might have been one the participants built together as the summit took place.
The summit was designed to be the Kabuki theater that it turned out to be -- scripted, formal and unsuccessful at unlocking new interpretations or understandings.  If you've got a Kabuki theater playing in your nonprofit board room, perhaps these rethinking these four elements will move your discussions forward in positive new directions.

Anonymous said…
What a great post! It's so much easier to vilify the idea of meetings altogether than it is to pay attention to the ways we shoot ourselves in the foot.

In the case of the health care summit fixing the problems you list may have been very difficult (are there any non-stakeholders or neutral parties left in the country?) But for our organizations you are right on.

I especially like #3 and I think it gets skipped because it's assummed outside facilitation will be too expensive.

I'd love to see organizations form meeting facilitation co-ops. They could pool resources to train 3-4 staff members each in facilitation. Then when any of the participating groups needed a neutral facilitator they could use someone from the group.
March 1, 2010 at 6:33 AM

Anne W. Ackerson said…
I admit I might have gone out on a limb a bit by using the health care summit as my example! As I watched some of it on TV, I kept wondering if the outcomes would have been any different if the group was seated at 3-4 round tables and if there'd been facilitator(s), whiteboards, flipcharts and all the rest. But that would have had to assume that the agenda for the summit would have allowed for rebuilding parts of the bill. It doesn't appear that rebuilding was the summit's intent.

Your idea about forming meeting facilitation co-ops is a great one. I know that in NYS government, certain folks get to participate in a facilitation training program that then offers them opportunities to facilitate all types of meetings throughout a variety of agencies.
March 2, 2010 at 7:46 AM