Merger is More than a Survival Tactic 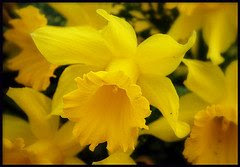 Just like the daffodils in my garden this spring, a few stories about nonprofit mergers can be found offering bright respites from the reams of gloomy headlines about cultural nonprofits in trouble.
The Boston Globe's April 15th story about the successful merger of two social welfare organizations made the point that the notion of merger seems to be a relatively new concept in the nonprofit world.  From my vantage point, merger is generally not an option to be found in the toolkit of most cultural nonprofit leaders.  As the Globe article rightly points out, mergers tend to be seen as a sign of failure; nonprofit leaders worry that mergers mean loss of autonomy or identity.  Indeed, one Globe reader summed up the distaste many have for merger, "Social service agencies can more typically be combined without anything essential being lost; arts institutions exist to fulfill a certain artistic vision, and combining two similar size groups usually means one vision endures and the other doesn't."  I would argue, however, that all one has to do is listen to those affected by hospital mergers, for example, to know that vision or essence is alive and well across the nonprofit sector.
The big first stumbling block to even contemplating merger as an option, as the Globe reader unwittingly underscored, is the emotional baggage people carry for the nonprofits they've founded, loved, worked for, given money to, or used the services of - it's "theirs", they "own" it; don't touch it.  I'd like to think that if we could somehow see past the me/mine mentality to the larger issue, which is often how can we keep our services affordable, our art collection accessible, our musicians employed -- in other words, continue the healthy growth of the organization -- merger becomes a logical tool to meet or rejuvenate vision and mission, not an ogre that kills them.
Because so many of us in the nonprofit sector fear merger, it's often contemplated too late in game. An organization that's blown through its money, has physical assets in poor condition, lost or is losing core staff or volunteers, and/or has cut back its program to the barest of minimums is an unattractive merger candidate in most anyone's book.  In fact, if an organization has gotten itself into this abyss, one has to question whether it deserves to survive.
There are many examples of organizations working hard at working together only to back away from taking the merger plunge.  In some cases, it was a good decision to back away, not so in others. Likewise, there are others that have worked (like the two in the Boston Globe article) and have worked well.
On the whole, I think a good merger can be the harbinger of organizational renewal and revitalization -- just like those daffodils -- and not the endgame.
Photo:  And the daffodils look lovely today.